I think I am changing my mind on the topic of puppies.

Yes, we were all puppies at one time. Still this is no excuse for disrespect for one's elders. When the big dumb wolfhounds had their puppies (they were dumb but not big), they had absolutely no respect. It was shameful. One couldn't walk across the kitchen without them running after one and snapping at one's legs. They did not wait patiently for their elders to get any scraps offered. They did not honor "everything in the realm belongs to the Estrela" rule. I mean, come on. And there were ten of them for a while there.

When they started disappearing I thought they must be going to get their just desserts. Sent away maybe to the Estrela Mountains where they would be taught properly by lots of Estrelas. Maybe someplace with lots of toads. Sending them off one at a time was brilliant... don't let them communicate with each other, keep their anxiety up, make them wonder what their fate will be.

Well, unfortunately, I have found out that they have actually been sent off to lead lives of luxury. Take a look at this one! Her name was Sikozu when she was at my house and she was the tiniest of the puppies. 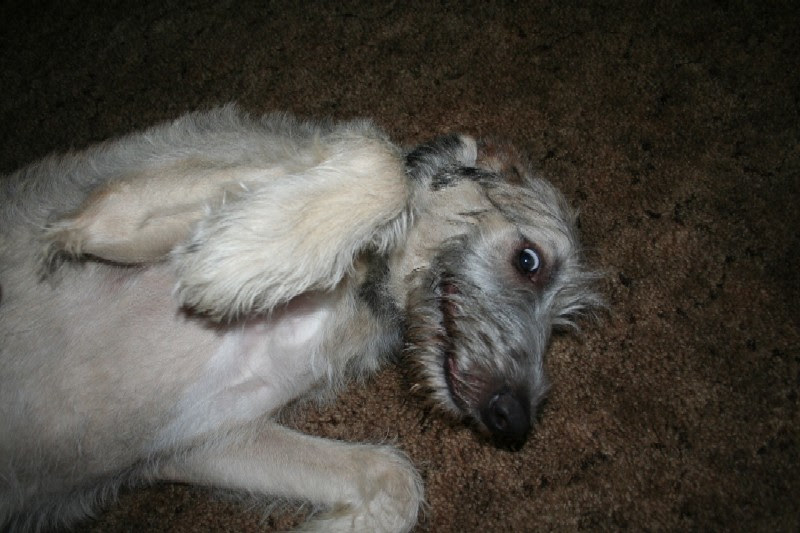 I mean, it is just shameful for a big dumb wolfhound to live a life like this. She acts like she gets belly rubs!

But here's where my feelings have changed. My agent likes to say that the best way to get "good" behavior out of your dog is to get a puppy. Your other dog will soon turn into an angel, which is just the humans' way of saying that it will not behave as a proper Estrela would. Now, I don't know why he would think this is true, because certainly there never was any dog in the household before moi... despite what the others in the house say about it.

But let me tell you... the puppies' bad behavior (bad by human desireability standards) really is a boon to the rest of us. We can still be "naughty" (by human standards) and the humans don't really care, because the puppies are more "naughty!" What a great thing! Make a little mark on the kitchen chair because it deserves some chewing? No problem, the puppies almost chewed it in half! Open the fridge to check out what is rightfully mine for the taking? Fine, because it will be the puppies who are gluttons and empty it out! A little peeing in the living room to mark my territory? Well, you would think that it would be eclipsed by the lakes in the kitchen, but alas not. Still, it only got me to spend more time outside where it's nice and cool. It's not like they tried to not feed me or stopped petting me or anything.

So, in effect, puppy behavior can be used to your advantage. Let it "lower the bar" of your humans' expectations of you, and you will be able to "get away with" much more of your natural, deserved behavior. Yes, they can be troublesome, but they can also be fun to play with (in small quantities).
Posted by Champion Bart the Estrela Prince at 8:49 AM No comments:

Once again, one of the youngsters in the house has made me proud. This time it was the big dumb female wolfhound.

Observe below her handiwork: 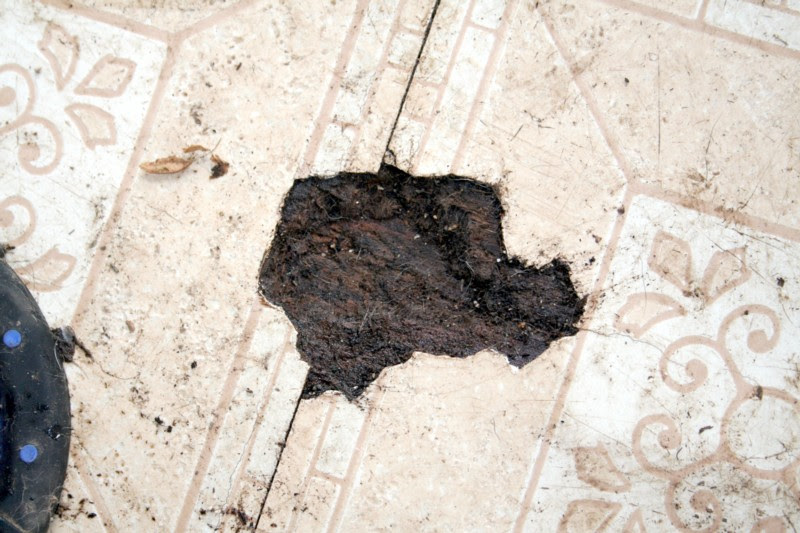 This is the result of the hole she has dug in the kitchen floor. Brilliant! She has not only pulled up parts of the vinyl tile, she has actually dug up part of the plywood subfloor. I bet if she hadn't been so rudely interrupted, she'd have made it all the way through.

I was outside on guard duty at the time, but I noticed it when I came in to eat the other night.

I had not had much hope for any of the youngsters, since they are of course wolfhounds, but this proves that they at least have some proper instincts. Now, I know my favorite human really didn't care for that vinyl tile, so the big dumb wolfhound was really doing her a favor, though she didn't really seem to appreciate what has been done for her!
Posted by Champion Bart the Estrela Prince at 1:58 PM No comments:

For new visitors: Bart writes an advice column (for dogs or humans). I will be posting some of his past columns for him here. You can also ask him a question and he will try to answer it here!

Dear Bart,
Why can't I have more cookies? My Mom seems to be very stingy when doling out the cookies around here. I know there are quite a few of us, but she only let's us have one at a time. My teeth are already falling out!!! She says there are new ones coming though, and too many cookies will not be good for them. But the cookies are the BEST!!!! They're right up there on the counter in a big jar.....should I go for it?
signed,
Drooling

Isn't it funny how the humans always feel the need to control the food in the house? They put our dinner out when they want us to eat, they hand out treats when they think we "deserve" them, like we are some kind of peons, and they tend to get angry when we help ourselves to the contents of the fridge or the kitchen counter.

The fact is, we have the right to any food we want. But in order to keep the humans under control, we need to provide them with the illusion that it is they, in fact, who are the ones in control. The food thing is one small way we must give them that illusion.

I do understand that you have needs. Desiring food is a natural thing, and for many of us, resisting the urge to help ourselves to what is rightfully ours is difficult. I have been known to binge on occasion, after having knocked over the food bins, spilling their contents on the kitchen floor. So, with that in mind, you have a few options. You can either "go for it" (as you put it) now, and earn yourself a reputation that you will not be able to shake, or you can lie low for now. The latter has some great advantages. Basically if you have the reputation of being "well-behaved," you can lull the humans into complacency, and they will be lax about leaving the really good food where you can get it. And then, instead of cookies, you might find yourself in a position to feast on filet mignon or something.

On the other hand, er, paw, once you eat that filet, your goose is cooked, and the humans will probably be much more careful with your (they would say “their”) food. So you may find a third option a good compromise.

It seems that if you are judicious in the food you "steal," the humans are much less concerned about it. Personally, while I enjoy cleaning out partially-empty pots and pans from the stovetop, it is much less stressful on the humans when I clean them out once they have been placed in the sink. You see, once they are in the sink, the humans really only intend for them to get washed out anyway, so really I am doing them a favor. Obviously if they were really concerned about me getting into the sink, they would not put any "dirty" dishes in there!

With a little thought you may be able to come up with an idea of your own which will not concern your Mom enough for her to stop you, which fits into your lifestyle and affords you good eating for years to come. Good luck!
Posted by Champion Bart the Estrela Prince at 1:42 PM No comments: