An Estrela's work is never done.

The invaders attempting to disturb my realm are increasing daily during this spring season.

Yesterday a pesky young yellow lab showed up on my front doorstep barking his head off. My agent, for some reason, felt it would be better to hang on to him while looking for his owner. Now, an Estrela would never be "lost" (even when we temporarily leave our homes) but apparently the same is not true for Labrador retrievers, otherwise he never would have ignored my warning barks and entered my realm.

Let me tell you, I do not care for this intruder. He barks a lot (the job of the Estrelas) and he is quite... energetic. My agent has placed a 'found' ad in the newspaper and hopefully he will be claimed... and soon.

Secondly there was a gigantic snapping turtle heading towards my pond tonight. I do not need any ducks bitten in half, and I don't want my agent to get injured when he gets his waders on and goes in there to clean out the pond. I like turtles, especially Myrtle (I haven't heard from her in a while!) but not snappers!

Now, I am brave but I am not stupid, and I'm not going to deal directly with a snapping turtle (not to mention it was not within reach of my kennel). When my agent came outside to move me inside in the face of an impending rainstorm (I don't know why he bothers with that, because I like the rain), I warned him by barking. Ok, so I always bark when he comes out, so he might have missed the significance of that particular bark, but then he walked right by it (he couldn't miss it). He herded it into a box and took it away somewhere. Hopefully to a painful snapping-turtle death, but more likely back to the creek from whence it came (hopefully downstream).

And last but certainly not least were the toads. There were a few out by the garage including one trying to get into my exercise area. And Batata tells me one actually tried to get into the house. Luckily she was on guard. Without me being inside as much these days, I have to rely on her Estrela-ness to protect the humans against this type of threat (the big dumb wolfhounds are no help in that regard).

There are some new pics of Batata (including some of her playing with me) in her gallery.
Posted by Champion Bart the Estrela Prince at 9:51 PM 4 comments:

I am very busy watching out for toads, but I thought I should fill you in on the latest exploits of the little Batata.

First off, she has already learned (on her own) she can jump the gate between the kitchen and the living room. This is a good thing to have learned but I did not teach her, because she is not ready for this kind of knowledge. What she needs to remember is that the gate is there to give the humans that illusion of control that I talk about so much. She has missed her chance to lull them into a false sense of complacency that she is "secure" in the kitchen. Now, they are more vigilant about putting the extra screen across when they are not right there to keep an eye on things. This means she has lost some opportunity to freely roam throughout the house at times when they are not at home.

She is not a real fan of the pen. In a way, this is good for her, as I found out the hard way. I never minded going in the pen all that much. Well, what this led to was me being put in there, night after night, not just when they were out of the house. Batata yaps and cries when they put her in there, so much that they don't have the heart (or the guts, I guess) to put her in at night. Good for her! They still do put her in during the day when they are at "work," but at night she is free.

One of the prime lessons I like to teach my students is the pure delight in chewing on three things: potholders, sponges, and "good towels." Potholders always taste like food because the humans are so sloppy using them. Sponges soak up all sorts of interesting flavors, and they are easy to chew. And good towels... words cannot describe the pleasure of the feel of terry cloth ripping between one's teeth and one's paws. Well, Batata last night stole her first potholders, and today, while my favorite human was down with a bad migraine headache, she chewed up almost an entire sponge mop head! She got that idea herself. I knew she was a smart one.

She has also tasted the table legs, chair legs, and the gate on the deck. And, if one of the big dumb wolfhounds opens up that gate for her, she delights in getting the recyclables out of the toy bins on the deck and playing with them. I never much cared for the recyclables but I guess I can see the attraction -- many of them did once hold food, of course!

Speaking of big dumb wolfhounds, I am a little disappointed in the young female one. She is trying to prove my theory wrong. I know she is jealous of the little Estrela girl, but she is really cranking up her "naughty" behavior. Batata does love playing with her, though.

Well, back to toad duty. Keep an eye out here for updates as they happen.
Posted by Champion Bart the Estrela Prince at 10:00 PM 1 comment:

I thought I should report on how the training of my newest protege, Batata, is going.

Now, you should be aware that it is a good thing for any Estrela to have a mind of his or her own. We do not submit to the will of the humans; we just sometimes make them think we do, to give them an illusion of control (which makes it easier for us to get our way with them).

I can report that Batata definitely has a mind of her own.

A couple of nights ago the humans let us together for a little one-on-one time. The little thing actually growled at me. I am proud of her. I heard she did that with the other dogs too. She had to put them in their place. Now she seems to like them, although she is a bit snappy around food. True that all the food in the realm is ours (hers and mine), but she cannot be rude about it! I will have to work on that. But anyway, back to me, where all attention naturally eventually focuses. I did not show any reaction to her behavior. It is clear that she was letting me know that she will not be intimidated. This will prove to be a good attitude as she grows up and does more guarding duty. I'm not sure she realizes she could be flattened by the big dumb wolfhounds if they wanted to do it. But it won't be too long before she's big enough not to have to worry about that anyway.

This morning the humans let us out at the same time in the two dog yards which have some distance between them. I took the opportunity to train her in the art of "warning barking." This is when the Estrela barks just to let anyone within earshot know he is on duty and they better not try any funny business. I personally do it anytime I go outside. She took to it very quickly. I am pleased. Toad season will soon be upon us.

Oh, my favorite human uploaded some pictures of Batata to her gallery. And for those who want an Argus update, he has a gallery too with some recent pictures.
Posted by Champion Bart the Estrela Prince at 12:30 PM No comments:

I am very happy and excited right now. I am no longer the sole Estrela in my realm! There is a new one here... and best of all, she's a girl (Ela stop reading now, you know you are my one true love)!

My humans were away from the house all day yesterday. When they returned, I smelled and heard the new arrival. Even before seeing her I knew by her Estrela bark that my wishes had come true, my Estrela mind powers had finally worked, and my humans had brought me an Estrela at last!

So, meet the newest Estrela Mountain Dog in the States. Apparently her name is Batata but I haven't decided what I am going to call her yet. She is only a youngster, a few months old, but I think she is hot. In fact, here she is: 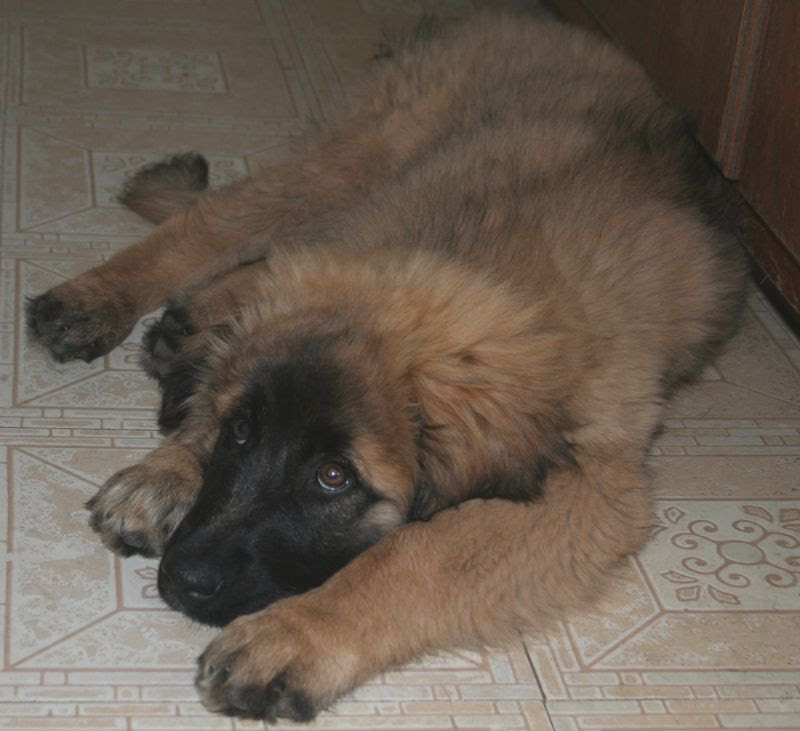 In that picture she is using her Estrela mind powers. Any guesses what she wants?

She came all the way from Holland yesterday. It was a long trip for her I'm sure, but she came through with flying colors, as any Estrela would.

I haven't had much time to spend with her yet but I wanted to post the news of her right away. It is wonderful to have a protege right here with me to instruct in the ways of the Estrela. The big dumb wolfhounds have from time to time shown promise but they're just not Estrelas. Argus is a great student but he is so far away. So, not only do we have another ambassador for the breed, I have someone I can easily pass my knowledge to who will really appreciate the finer points of the Estrela way.

I will post more after some initial training sessions!
Posted by Champion Bart the Estrela Prince at 11:15 AM No comments: