Take a look at this guy: 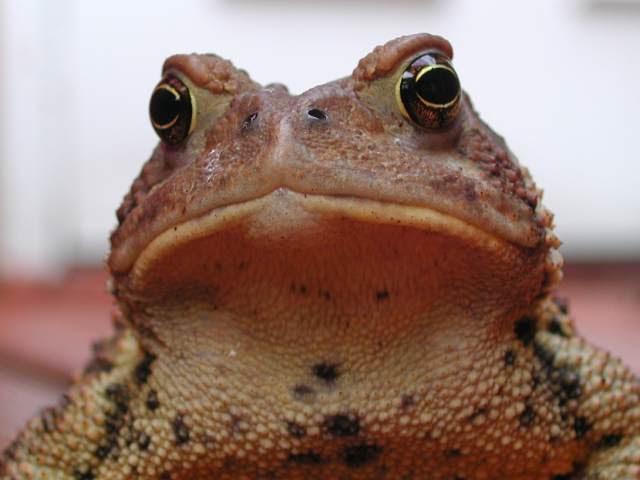 At first glance, he looks like a mighty evil toad. But I found out from Myrtle that he is actually the frog I spotted earlier. He is in disguise as a toad so that he can infiltrate their forces. Pretty good idea, but I don't think I could pull it off. Look at that detailing! You can even see the little detonators on some of those nuclear warhead bumpy things.

I haven't seen ANY tadpoles in the past few days. It's a good thing the frog is able to get into the toad lair and report on what exactly is going on. It's dangerous work, especially for a non-Estrela.

The other night, I heard some troublemaker getting into the duck food bin (it's one of those big plastic garbage cans). I couldn't see it because I was stuck in my crate overnight (an indignity I've gotten used to), but I barked to alert my humans. They were too lazy to do anything about it, but I know my agent was a little unhappy to see the can knocked over and the lid off it in the morning. Well, there was hardly any food left, so it was not such a big deal. So yesterday he filled it up with duck food and guess what... those rascals managed to get the lid off!

Luckily it did not rain, or all the new food would be ruined. But tonight the lid is tied on. Let's see them figure that out!

Oh well, I have eaten my dinner and made my blog post, now I must find an inconvenient spot to lie in so that I am rested for my post-bedtime barking.
Posted by Champion Bart the Estrela Prince at 7:21 PM

The lid was tied on? Child's play. I trust you see your humans were foiled.

Drat! One of my operatives was captured by your treat box. I am not finished with you or your little humans either.