They can't outsmart me!

There's this lovely garden hose attached to the outside water faucet right inside the fenced-in part of my yard.

For a while, I merely wondered what it was. There were already enough other great things to chew on attached to the house -- dryer vent covers, window trim, and siding. But eventually, curiosity got the best of me, like it does all good Estrela Mountain Dogs, and I tried chewing on it.

And it was good.

Eventually I managed to chew some holes in it. To be honest, I was not going to stop here, but it was great fun when my humans tried to use the hose and water sprayed out from the holes. hahahaha! I guess they didn't think it was so funny though. My agent cut off the part with the holes, put a new end on it, and it was good as new, if a little shorter. And they moved the ex-pen (which by now was blocking my access to all the other good stuff on the house) so that it protected the hose as well.

But my humans did not think things through completey. The ex-pen blocked their access to the faucet as well, so they had to move it any time they needed to get water. And eventually they forgot to put it back. The chance was mine! The chewing commenced anew. This time I kept going until I chewed through the whole thing.

I left a little piece dangling from the faucet and I chewed pieces off from the other end, heading under the deck until I could no longer reach it. I swallowed a whole bunch (you could find pieces in my poop for a while afterwards).

And wouldn't you know it, my agent repaired it again. I was thinking how great he was to replenish my chew toy stock, next time he forgot to put the ex-pen in my way. But then one day I saw this: 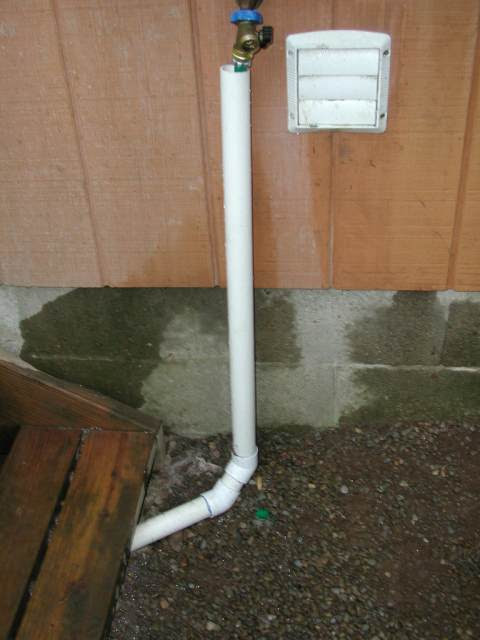 (the more astute among you will be putting two and two together and realizing
I defeated this trick, and this photo is actually of the aftermath of my activity)
Ok, that looks like a challenge to me. Any Estrela Mountain Dog would think the same. And boy, did I outsmart these dumb humans.

You see, the horizontal part of this contraption only goes partway under the steps. And since it is not attached to anything, it eventually (with a little help) moved to where I could easily access the lower end: 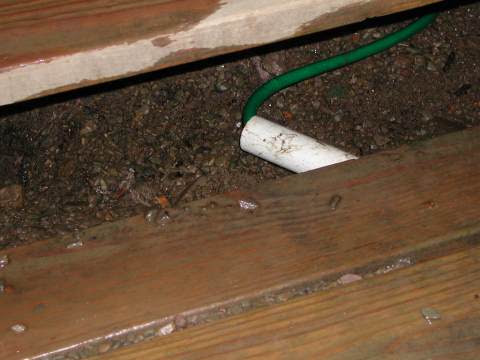 And if you look closely in the above picture, you can see where I created another lovely water spray hole for next time my humans used the hose. And I took these pictures to prove the results!

All Estrelas (and other breeds), keep your eyes on this blog for the next installment of How To Outsmart Your Human. I have heard some lovely stories from some of my co-Estrelas and I may publish them here as well!
Posted by Champion Bart the Estrela Prince at 11:02 AM

It is so nice to see that you are living up to your ancestor's reputation Sir Bart! Perhaps we can meet some day, if you are willing to spend time with the Ambassador, so we can discuss future tactics in the ongoing battle with the humans!

Asti! I do hope to meet you, having heard so much about you.

Just so we're clear... the battle with the humans is a battle of wits only. We're trying to protect them from the evils that lurk all around us. But, we cannot let them tell us what to do or prevent us from chewing on the "good towels," if that's what we want!